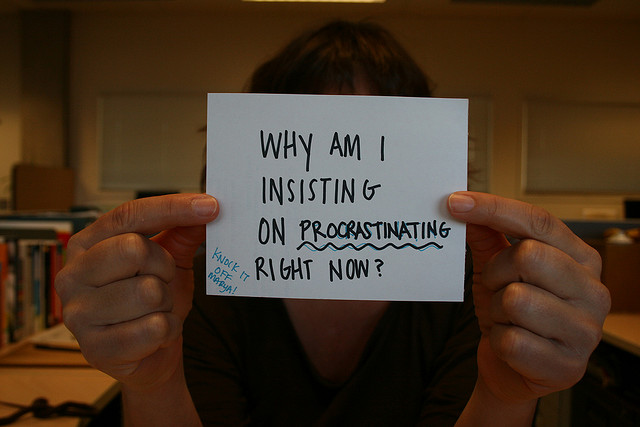 Last weekend my wife stormed into my home office. “You spent all weekend on the computer” she said, “and it was the one weekend without the kids and you were either on your head phones. playing chess or responding to FB comments.” And then she walked away. Upset. There would be no way to make it up to her. The weekend was over.

I had big plans for that weekend. An article of mine was coming out 6am on Saturday and I have two articles that I am putting out in the next few weeks. Plus I’m in the middle of starting three different businesses.

So what was I doing? Why was I procrastinating so much?

I started a search, “How to avoid procrastination?” There are a thousand pages about this. A lot of it involves cutting a vein if you do something bad. Or taking pills of some sort. Ritalin. Whatever.

I find myself procrastinating on a daily basis. The most basic is: “return so-and-so’s email”. A simple thing I Know. I could easily answer with “Hi” and that would be that. But I don’t. I go online. I play scrabble or Counter Strike. I visit my Twitter account. My Facebook feed. Should I respond? My emails. Then I think of that song from 1990 - Hammer Time, “U Can't Touch This”, I just simply have to listen to it. Then I hear it again. Then I repeat “the loop”.

(Just wait a minute, 2 more “interactions” on FB. Be right back. And now that you mention it, I think I want to listen to that Hammer song again).

Ok, I’m back. just one more thing and I'm with you. Someone had tagged a post of mine on FB and I wanted to “Like” it. Ok, where were we:

1) Do stuff you really like. Presumably you aren’t cleaning your shoes when procrastinating. Unless you are into that sort of thing of coarse. You're most likely to be engaging in things that you enjoy doing. Even if it’s FB. I love FB. And if not that, then I'm playing Counter Strike. I play about 100 times a day. It’s mindless. But I get constant stimulation. Am I great? No!? Ok, play again. Yes!? Ok, play again to confirm it. On and on.

2) Just maybe your procrastination is trying to tell you something. It could be that the idea you were working on is bad. I started a software project once that I was going to make into something really big. But I kept doing everything BUT the software project. Procrastination is often your mind’s way of saying: “That's bad! This good!” and puts your body to work on things you prefare doing. It's time to listen to yourself. Ask, why am I procrastinating? Maybe I’m not calling that client back simply because I don’t like him.

Yes! It’s true. If you DON’T LIKE somebody then you might not want to do business with them (what a luxury). People sometimes say, “its not personal, its just business.” No way! That can be the real reason why we sometimes procrastinate. Because business, or anything else that you get involved in, is personal. You're not a robot! You want to be around people who lift you up and inspire you. And to procrastinate is the way your body and mind are telling you that something is wrong.

3) So what if your procrastination is telling you that you don’t like doing a particular thing. Delegate. Howard Hughes would procrastinate all the time. He developed techniques in the movie industry that are still used. He broke aviation records and owned the first transcontinental airlines. He was the "Steve Jobs" of the 30s.

Do you really think Hughes did the mundane work himself? Like the accounting work when his Company was the main electronics parts supplier to the military during World War II. Of course not. He delegated. Often your procrastination is giving you a guided tour of the things you need to delegate (i.e. the things you are not doing while you are procrastinating).

4) Stop and consider why did I procrastinate and not attend that meeting? Or why was I ten minutes late to the meeting? Or I didn’t confirm an interview appointment on time and they cancel. This happended to me some time ago.

Because I didn’t want to drive into the city (I live 50 miles away) and meet boring people for half an hour and then drive the 50 miles back. That’s a drag. That’s about 150 minutes altogether of doing nothing for those 30 minutes of interview. I’d rather be reading, writing, playing Counter Strike, putting on my Batman outfit and saving lives, and all sorts of other stuff.

5) Try to brainstorm. This is the only thing I’m asking of you here. When you feel an overwhelming urge to procrastinate. Or you don’t feel like writing a business plan. Or you don’t want to go to that meeting, just brainstorm for a second: what are all the useful things you can be doing now instead of the boring thing you feel required to do?. Maybe the entire idea is a bad one. Maybe your business is bad. Stand up and go to another room to take a fresh look at it.

It’s not out of the question for you to have bad ideas. In fact, statistics tell us that 99% of your ideas are going to be rubbish. I once set up a dating service with intergration to Twitter. BAD IDEA. People want to be anonymous on a dating service. Not so on Twitter. I kept procrastinating on raising the capital. Finally, the money I had raised, I returned, and I closed the whole thing down instead of wasting two years of my life before it would’ve failed anyway.

I keep a handy note pad with me at all times to physically write my ideas down. There’s always something to brainstorm about (business ideas, investing ideas, book ideas, SURPRISE! Ideas (everyone likes to be surprised). Often when I’m about to procrastinate, the one discipline I try to do is go off to another table and start listing things for a few minutes.

Here’s my conclusion, after thousands of hours of constructive procrastination: Don’t do what you don’t want to do. Procrastination is great because it tells you what you like to do. It also tells you what is probably a bad idea, or something you should really delegate.

I use Procrastination every day to make my life better. I do the things I want to do. I figure out what I need to delegate. I brainstorm ideas, and I find clues buried in my subconscious about what my future will look like.

That is what's great about Procrastination!

What The Middle Class Fail To Understand About Rich People

Are We Naturally Monogamous?